Located upstream to Paris on the river Seine in the Essonne Department, the Coudray-Montceaux dam is part of the waterways modernisation project developed by VNF (Voies Navigables de France). Its aim is to provide a more effective and safer management of the reservoir waters as well as controlling the water levels of the Seine up to the Vives-Eaux dam, located 14 kilometres upstream. It ensures that large river transport units can navigate to and from the Paris agglomeration and beyond. Fully automated, it consists of three flap gates feeding two locks, each 30 metres wide and one 15 metre-wide regulating outlet. Ducrocq Engineers designed, manufactured and commissioned three flap gates weighing in total more than 80 tonnes and also managed the hydraulic and electric control systems. Ducrocq Engineers operated within a consortium including EMCC-Demathieu and Bard-GTM from the Vinci Group. 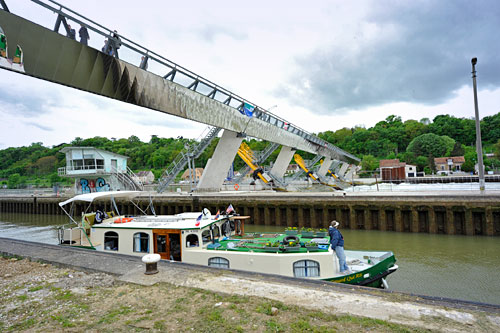